Trumpeter Chuck Seipp culminated his 32-year career from The United States Army Band, “Pershing’s Own,” as Concert Band Group Leader. Sergeant Major Seipp performed at national, presidential, and historical world events, at concerts and special events in Washington, D.C., and for funerals and wreath-laying ceremonies in Arlington National Cemetery. He performed with the Concert Band, Orchestra, Ceremonial Band, Herald Trumpets, The Army Brass Quintet, and was a featured soloist.

Chuck has toured and recorded throughout Europe with world–renowned organist Diane Bish, appearing regularly on her “Joy of Music” television series. As an active teacher, soloist, clinician and performer, he has performed locally with the National Symphony Orchestra, Washington Opera House Orchestra, Washington Ballet Orchestra, and Washington Bach Consort. He also leads and is active throughout the Mid-Atlantic Region with The Commonwealth Brass Quintet.

Through CJ Seipp Music Publications, he markets his own brass arrangements, many of which have been played and recorded by the Canadian Brass Quintet, The U.S. Army Brass Quintet, among many others. Chuck’s recording project of The Wedding Book is a collection of his arrangements has proven to be a valuable resource for organists and trumpeters nationally and internationally.

Chuck’s recent years passion has been promoting and performing with the Seipp/Sheets Trumpet & Organ Duo. From recording projects to travels across the country concertizing with Dr. Randall Sheets, Arlington National Cemetery Ceremonial Organist (retired), this duo takes performances to unprecedented entertaining and musical heights through all styles of specialized arrangements synchronized to captivating and moving videos.

Chuck, Yamaha Performing Artist, holds an undergraduate music education degree from The University of Kansas and masters and doctoral degrees in trumpet performance from The Catholic University of America. 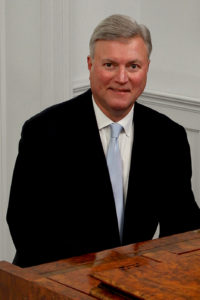 Randall Sheets recently retired as Ceremonial Organist for Arlington National Cemetery, where for the past twenty-five years he honored our fallen veterans while performing over 1000 services a year in the historic Old Post Chapel.  He served as a resource for military chaplains and families in planning services and has performed for dignitaries and government officials at the highest levels including senators, Supreme Court justices, secretaries of state and congressmen. Randall now works for the R.A. Daffer Church Organ Company as a sales representative for Northern Virginia, Washington DC, and eastern West Virginia.

A graduate of Wittenberg University, he studied with William Walters (piano) Trudy Faber (harpsichord) and Cheryl Colantonio (organ), then received a MM from Bowling Green State University under Jerome Rose (piano) and Vernon Wolcott (organ) and a DMA under Thomas Schumacher (piano) at the University of Maryland.  Throughout his graduate study Dr. Sheets taught at the University of Maryland and the Smithsonian Institution, and later taught at the Levine School of Music, the National Cathedral School, and the Landon School. He was awarded the Liszt Commemorative Medal by the Hungarian Minister of Culture for his work as Festival Director of the Franz Liszt Centennial Celebration held in Washington, D.C.

Randall tours frequently with trumpeter Chuck Seipp as the Seipp/Sheets Duo.  They have performed over 100 concerts during the last six seasons in twenty-two states at universities, churches, and festivals.  Their concerts are an innovative blend of standard repertoire, patriotic programs, and contemporary arrangements with video.  They continue to commission many new arrangements and compositions as well as creating their own arrangements.